A day in the life: Installing Wi-Fi at a Greek refugee camp

Installing internet to bring connectivity in camps is no easy feat. NetHope teams give 110 percent to the effort, and long hours are the rule, not the exception. 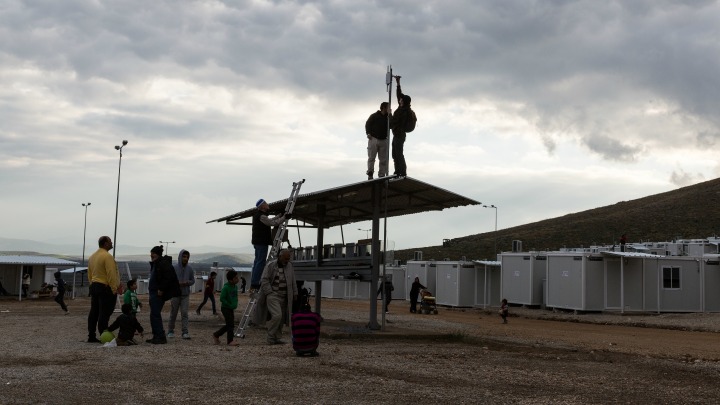 Editor’s Note: Ryan Chen, a motion designer/illustrator at Google, was a member of the 11-person NetHope Team J deployment to Greece and its official mission storyteller.

Installing internet to bring connectivity in camps is no easy feat. NetHope teams give 110 percent to the effort, and long hours are the rule, not the exception.

December 11, 2016, started early -- 7:30 a.m. The camp we were wiring was several hours away by car. Along the way team members maximized the time by checking email and logging onto the Meraki dashboard of already installed camp networks. John-Henry Saxby, from Cisco, checked the link quality and usage of the previous day’s install. He held up his sweatshirt to block the sun, cutting the glare on my laptop as I filed photos from the deployment.

Upon arrival in camp, team leads Isaac Kwamy, David Tagliani and Matt Altman met with Greek military personnel to determine the best places for Wi-Fi access points. My Google colleague, Charlie Hall, used printouts from Google maps to sketch out a diagram for access point placement. Isaac called the group together to formulate a plan for the day, splitting the group into three teams. Refugee men and children watched curiously as the three groups installed access points throughout the camp, and were eager to help. At one point Charlie needed a small object to wedge into a ring-shaped bracket to keep it tight. A Syrian refugee brought him a metal tube with grooves, which fit perfectly.

The networks can be managed and monitored remotely via the Cisco Meraki dashboard. If there’s a problem with the connection, NetHope staff can troubleshoot and make adjustments from anywhere. Still, the access points and Ethernet Cat-6 cables are installed up high where they can’t be tampered with. The team climbed up ladders and attached poles to roofs of the shipping containers, which serve as refugee apartments, and then secured the units to those poles.

When the sun set, the headlamps came on. Camp management encouraged us to leave as night fell due to security concerns. We had to balance staying on schedule with setting up quality, strong signals. The evening ended at 8 p.m. with an hourlong drive to the next hotel, then a debrief at 9:30 p.m. to determine what worked, what didn’t work, and how we could improve our processes. Though physically and mentally tired, we were energized by the work that was accomplished. After some rest, we were ready to start fresh the next day.

The NetHope-led Syrian Refugee Connectivity Alliance was made possible by the support of Cisco, Facebook, Google, Microsoft, The Patterson Foundation and UNHCR. With the completion of this mission, 75 refugee camps in Greece now have Wi-Fi, providing refugees with critical access to family and friends and services.