As a shared positive experience, coming together on a few common dreams and a shared view of what may be possible lays an excellent foundation for the next steps. 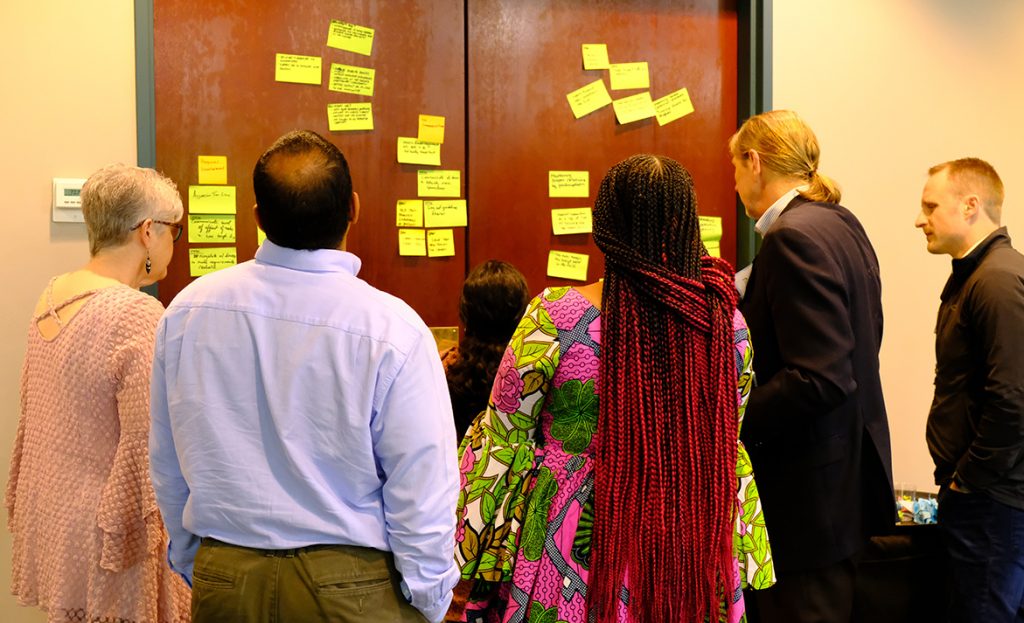 By Fredrik Winsnes, Director, The Center for the Digital Nonprofit, NetHope

Even when you “seek to break new ground and not duplicate the effective efforts of others,” you still need to work as a team.*

If you’re familiar with The Carter Center, then you know its guiding principle is to innovate and not be duplicative of others’ efforts. But just because you want to do what others don’t, doesn’t mean your need for coordination, clear roles, and access to timely information is any different from those others.

Very recently, I had the distinct pleasure of spending two days with a broad, cross-sectional team from The Carter Center at its beautiful campus in Atlanta, Georgia. Thirty of its employees ranging from top management to field office finance staff from West Africa gathered to “imagine the possible” relative to financial and grant processes throughout the organization. In addition, AKA (the NetHope & Microsoft implementation partner) was represented with five consultants plus representation from Microsoft and NetHope.

After Patti Bunker, The Carter Center CIO, welcomed everyone to two days of exploration, creativity, and fun, we were honored to receive an inspirational talk from Ambassador Peters, Carter’s CEO.

Peters encouraged us to dream BIG & BOLD, stick with core Carter Center values of respect and trust, while considering the increasing demand from stakeholders of their peace and health program portfolios. She was excited to learn about the outcome of the two days and how it would contribute to current strategic planning efforts.

The dream session was masterfully facilitated by AKA who quickly set the ground rules for the Design Thinking Sessions ahead. While we had been briefed on the process earlier, we were encouraged to participate fully and consider this a “family event” especially pertinent since our facilitators, Shane and Isabel, were a married couple expecting their first child in July.

After a short introduction and ice-breaker exercise, we got down to a quick task to get familiar with personas, expressions of empathy, and journey mapping which would be essential knowledge for the rest of the sessions.

Breaking into groups detailing current state scenarios, grouping and prioritizing work scenarios, and process flow ripe for improvements, report-out sessions were conducted for group input and refinement. At the end of the day each team had narrowed down to three areas of improvement that was placed on the impact/effort grid and, surprise, surprise, they all clustered in the high impact/high effort quadrant. Overarching themes were challenges with disparate systems, lack of easy access to data, and some overlapping roles and responsibilities.

Day Two was spent on internal and refreshing reflections and deeper drill-downs in the scenarios selected. The teams were asked to imagine the “future state of The Carter Center” and describe it to the larger group. All the groups selected to illustrate their chosen scenario by acting out a skit which were all presented to, and enjoyed by Peters. Data silos were broken down for faster decision making for the benefit of target populations by freeing valuable field and HQ staff time; and a finely tuned and “lean decision-making machine” where all had access to the information needed for optimal business process execution and decision making.

Ample time was dedicated to reflecting on the dream scenarios presented and it was striking how the same themes were repeated. Further analysis will be made from the many team worksheets documented; solid, raw materials for a Dream Book to be published shortly.

As we concluded the two days of hard work, the teams were upbeat and excited about the possibilities presented but with a firm grasp of realities. We heard comments like: “Just because it has been done a million times elsewhere doesn’t mean it’s going to be easy at The Carter Center,” and “Financial systems are just TOOLS; how you run the business is important. Key performance indicators (KPIs) start with people and program execution and then reflected in financials.”

As for the participant’s reactions to the design-thinking process over the two days, attendees reported what they learned:

As a shared positive experience, coming together on a few common dreams and a shared view of what may be possible lays an excellent foundation for the next steps. We all look forward to the resulting Dream Book that outlines the way forward.

*The Carter Center mission: “The Center seeks to break new ground and not duplicate the effective efforts of others.”