The resources of Cisco and its TacOps team, in terms of expert personnel, equipment, and advice, have been integral to much of NetHope’s disaster response deployments over the last nearly two decades. 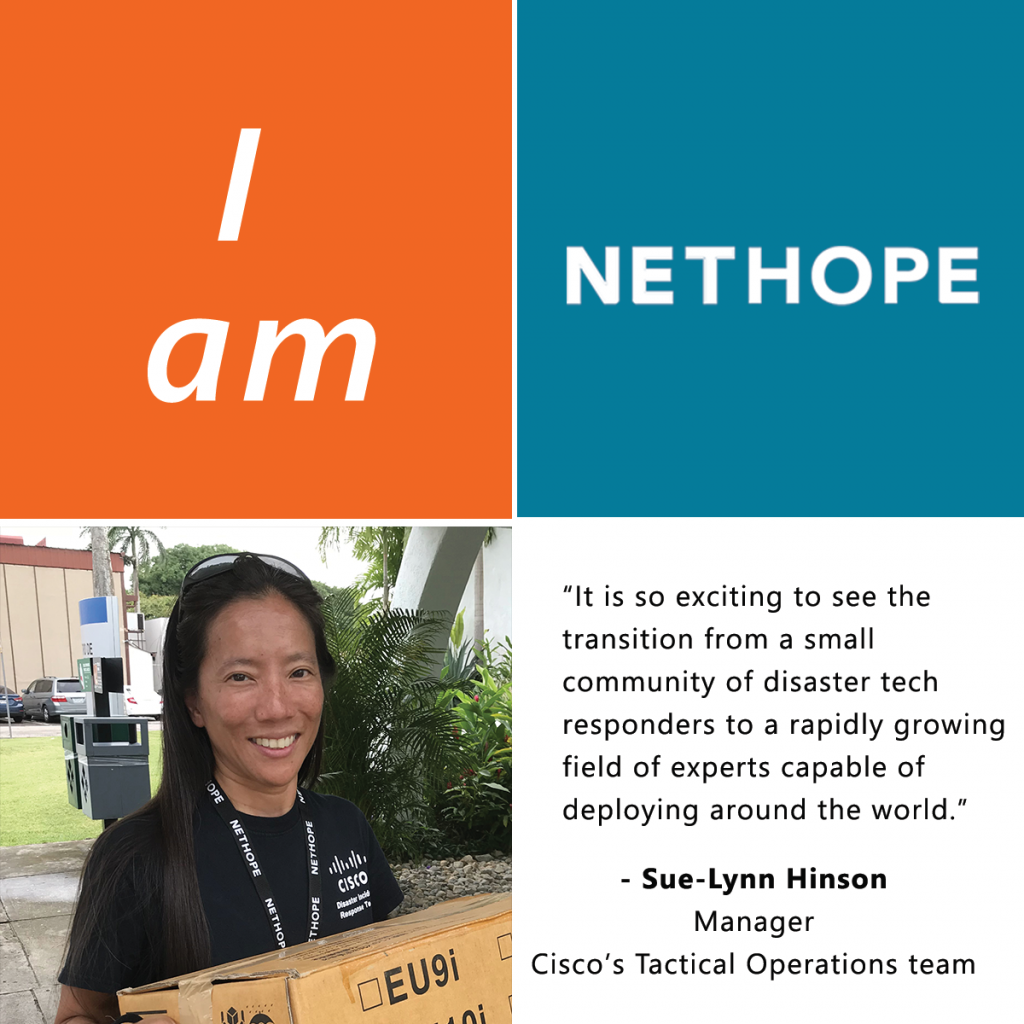 Welcome to the fifth in a series of profiles of NetHope members and partners entitled ‘I am NetHope.’ These individuals represent a broad spectrum of our member organizations, tech partners, and funders. They demonstrate the collaborative spirit that was the founding principal of NetHope 18 years ago, and continues today. They reinforce the concept that we are better together and that when it comes to NetHope you get what you give.

If there’s an emergency, you want Sue-Lynn Hinson on your side.

Hinson, manager of Cisco’s Tactical Operations team (TacOps), is a veteran of helping people in need, serving as a volunteer firefighter and Emergency Medical Technician for 20 years. But it was the melding of her strong desire to help those in need and the expertise of her professional career in technology that led her into her collaboration with NetHope.

The Cisco TacOps team’s primary mission is to provide secure, IP-based, deployable networking and communications solutions in the acute phase of crises in which normal infrastructure has been degraded or destroyed. TacOps involvement with NetHope pre-dates Hinson’s tenure, going back to the genesis of NetHope.

“(The TacOps) team was the perfect harmony between my two passions where I could use technology to help people!” she states. “I started as a software engineer and have held a variety of other roles including technical lead, project/program manager.” These positions have spanned the gambit of industries from aerospace, telecommunications, and system networking. This eventually led her to Cisco in 2000 and the TacOps team in 2010, coordinating disaster events and trainings, then eventually becoming manager of the team in 2014.

“We initially partnered on the response to the southeast Asia earthquake and tsunami in 2004, providing equipment and collaborating with NetHope to develop the Network Relief Kit (NRK),” she explains. Cisco and Save the Children were part of the co-founding of NetHope in 2001, inspired by an interest in uniting international NGOs to solve ICT challenges. TacOps has since partnered with NetHope, providing technical expertise and training, equipment, and ongoing support for disaster responses as well as technical support to its members, programs, and projects.

One of Hinson’s first engagements with NetHope was helping to develop the Refurbished Cisco Equipment donation program. This concept was the brainchild of Randy Pond, Cisco’s Executive Vice President of Operations at that time (now retired), in response to the 2010 earthquake in Haiti and flooding in Pakistan. The program was a success and provided a process through which NetHope members could submit grant requests for refurbished Cisco devices for their humanitarian relief operations.

The resources of Cisco and its TacOps team, in terms of expert personnel, equipment, and advice, have been integral to much of NetHope’s disaster response deployments over the last nearly two decades.

“Our team has deployed alongside NetHope to many crises, from natural disasters to refugee/migrant situations,” says Hinson. This team has provided critical connectivity to NetHope members, governments, response agencies, and affected populations around the globe, including: the refugee crises in Europe (Greece, Slovenia, Serbia) and Africa (Uganda); following Hurricane Maria in Puerto Rico; relief efforts in Guatemala following the eruption of Volcan de Fuego; and currently, the Venezuelan migrant crisis that has spilled into Colombia. TacOps members have also participated in several of the NetHope Working Groups (Connectivity & Infrastructure, Data Protection & Information Security, Humanitarian & Disaster Response) which help identify, collaborate on, and solve problems related to providing technology solutions for humanitarian, development, and conservation issues.

Cisco has long been deeply committed to corporate social responsibility, proactively accelerating global problem-solving to benefit people, society, and the planet. Its partnership with NetHope plays a huge part in that—contributing its technology and expertise gives Cisco a vehicle to maximize its impact across the globe, especially combined with the depth and breadth of NetHope and its member organizations,

“We often say that communications is aid as much as food, water ,and shelter,” Hinson notes. She is reminded of a poignant moment during deployment in Greece to support the Syrian refugees that underscored the importance of the partnership with NetHope.  The first questions from refugees as they arrived on the Greek shores were: ‘Where am I?’ and then, ‘Do you have Wi-Fi?’”

Like any good manager, she recognizes that her success is based not only on her own talents, but the dedication and expertise of her team. She credits Matt Altman as the keystone individual for many of these accomplishments.

“As TacOps manager I’ve supported the team as they’ve increasingly engaged with NetHope on crisis deployments as well as peace-time efforts, most recently the global Disaster Response Training initiatives in Panama and the Philippines,” Hinson notes with enthusiasm. “It is so exciting to see the transition from a small community of disaster tech responders to a rapidly growing field of experts who are capable of deploying around the world.”

“Senior TacOps engineer Matt Altman played a key role in the design and implementation of NetHope’s DadaabNet, a large-scale, high-speed, broadband network.” The network provides communications services to the relief agencies operating at the massive, Kenya-based refugee settlement. Hinson notes that since 2015, Matt has been dedicated 100 percent to supporting NetHope in a Technical Liaison role, where he drives new technology adoption, providing guidance for members on network design and architecture, facilitates strategic partnerships, leads technical field teams on assessments and deployments, and many other roles.