Women’s advancement is key to alleviating poverty. Digital technology can be a powerful tool to help. Yet, merely giving marginalised women around the world access to technology is not enough. Here’s why. 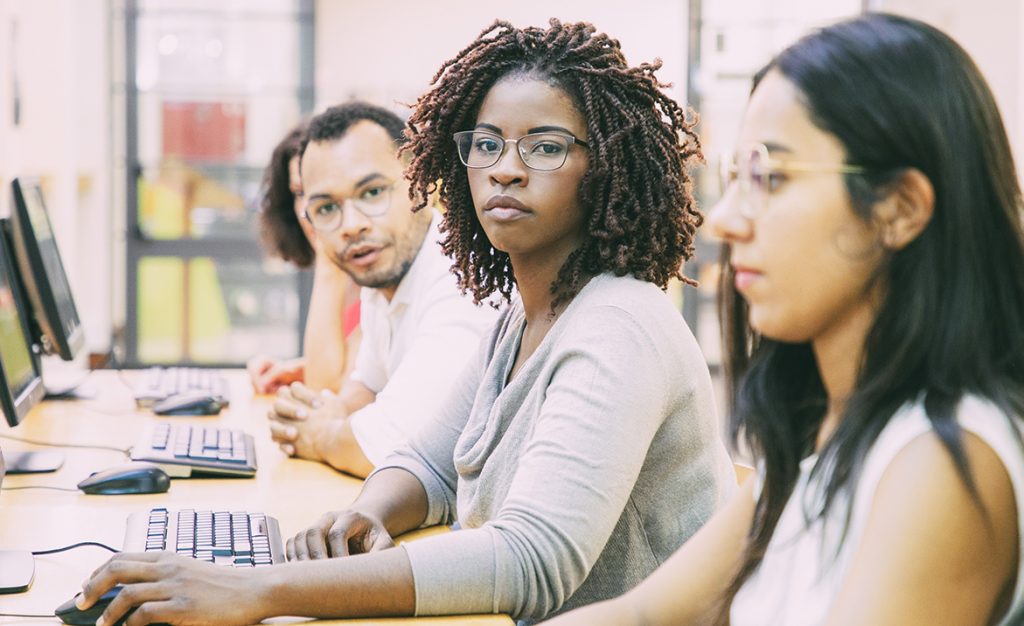 Cost, skills, relevance, time, poverty, and safety concerns. These are the factors that are almost universally listed as contributing to the gender digital divide. Some reports list social norms as a factor after the first three. However, the truth is, all these factors are outcomes of social norms. Social norms are the root cause – with the rest of these factors resulting from those deep-seeded gender and power inequities. It is a red herring to list cost or skills as the underlying reason for the gender digital divide. However, it’s unsurprising that women often blame these external factors, as social norms are psychologically internalized and often perpetuated by women themselves.

It’s also, on the surface, helpful for responders – as factors like cost and skills are much easier to address.

A company can heavily subsidize handset or connectivity costs, and an internet café can offer free women’s days, but these good things won’t create long-lasting change if the root causes of digital inequality aren’t addressed too. In order to effectively bridge the digital gender divide, NGOs and companies need to meet women where they are in terms of access, cultural appropriateness, literacy and user interfaces, hardware and network availability, and the perceived benefit of being online.

As part of the ten-year NetHope USAID Global Broadband and Innovations Alliance, NetHope, USAID and Intel launched the Women and the Web Alliance in 2014, with partners World Vision, World Pulse, Women in Technology in Nigeria (WITIN), and UN Women. The aim of the project was to improve the lives and livelihoods of 640,000 women and girls in Kenya and Nigeria by offering them the following skills and opportunities: digital literacy, relevant content, economic empowerment, and accessing online social networks. While there were some great success stories through this program – like Jessica in Nigeria, who had never before used a computer and has now successfully used the internet to grow her hairdressing business – there were also shortcomings. The program didn’t address the root cause of the gender gap – and so, for many women, the training and opportunities didn’t stick.

In order to viably close the gender digital divide, NGOs cannot ignore the fact that in many conservative communities across the world, people don’t want women to have access to the internet. Internet use is deemed ‘immoral for women’ and has resulted in honor killings and imprisonment. The internet is a huge risk to the traditional social order, and to be effective, we need to understand the beliefs and the social norms present in communities before bringing in digital solutions.

As a result of the findings of the Women and Web Alliance, USAID created the WomenConnect Challenge  – seeking to overcome the barriers that stop women utilising technology even when it has been made available to them. The common characteristic across the current 12 programs include: identifying the barriers to women’s technology access and use, creating compelling cases to use the internet, and then obtaining not just permission but explicit enthusiasm from those who had previously disallowed or discouraged women’s technology use.

Some of the most effective practices include:

• Working with the gatekeepers and those averse to women accessing the internet – husbands, fathers, mothers-in-law, religious and spiritual leaders, and community leaders to understand the root of their distrust and to build interventions that directly address those fears. One example was content being initially limited to certain topics until those in control realized the benefit of letting women access additional content. Women engaged in smaller challenges to find better tasting recipes or find educational content to help children with homework, thereby demonstrating value and trust. In time, and with the blessing of those in power, women were often given full permission to use technology formerly prohibited to them.

• Helping build confidence for women to interact with technology, often for the first time. Having internalized their lower status, many women claimed to be too stupid to use technology and unwilling to engage at all. By using interactive voice response (IVR) technology in one community, women could learn rudimentary digital skills on any feature phone at no cost. Women made great use of a service that allowed them to find out what the internet was, what email was, what social networks provided, how to stay safe online, and how to get data bundles. There were more advanced topics for those who built up the confidence to use the mobile internet for the first time, and over 200,000 calls were received.

• Putting women in charge of the internet. Women in internet deserts trained with community network experts to set up and manage a women-led community network, thus bringing affordable connectivity to a community for the first time and demonstrating that technology is a woman’s place. By creating new roles for women, new social norms followed, and women became the natural and expected technologists and ICT trainers.

• Creating a social network for illiterate populations. Disadvantaged women know the internet exists and that they do not have access to Facebook. One project created a text-free social network that used voice messages, photos, and videos as the communication medium. With commands similar to WhatsApp and most mobile phones, women with no education or digital skills were able to create an online platform. Given the ease and media richness of this social network, there was dignity in the design that is often missing from applications that are made for the poor.

These kinds of practices are more effective and hold more promise than technology training programs – because they tackle the social norms that prevent women from putting their digital training into practice. They also allow the women to lead the technology, not the other way around, empowering women to join the digital world on their own terms and for their own benefit.

Common statistics put the mobile internet gender gap at 30% in developing countries, with gaps over 50% in many countries. There is a critical need to reach more women as more and more development efforts become digital – a trend accelerated by the Covid-19 pandemic. In order to effectively do this, addressing the root cause of the gender divide is vital.

This blog post is based on What’s Next: Closing the Gender Digital Divide, written by S Revi Sterving, Director, USAID W-GDP WomenConnect Challenge, as part of the NetHope USAID Global Broadband and Innovations Alliance. Read the full report here.