Commitment Large and Small to the Ebola Fight

Last weekend I had the chance to spend a few hours with scores of other volunteers who braved the cold to spend their Saturday loading software onto thousands of smartphones at Seattle’s Living Computer Museum. The smartphones are headed to West Africa to support the Ebola response efforts of government agencies, UN organizations, international NGOs and local communities. They will help frontline Ebola response workers to more effectively gather and share data, helping them respond to the needs of victims and communities more effectively and coordinate efforts across the multitude of local and international organizations responding to the crisis. 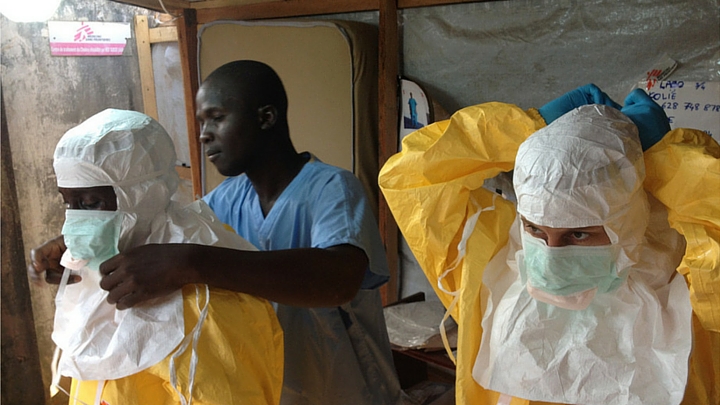 Last weekend I had the chance to spend a few hours with scores of other volunteers who braved the cold to spend their Saturday loading software onto thousands of smartphones at Seattle’s Living Computer Museum.

The smartphones are headed to West Africa to support the Ebola response efforts of government agencies, UN organizations, international NGOs and local communities. They will help frontline Ebola response workers to more effectively gather and share data, helping them respond to the needs of victims and communities more effectively and coordinate efforts across the multitude of local and international organizations responding to the crisis.

As announced this week, Paul Allen will ship more than 10,000 of these specially programmed smartphones to West Africa to enhance data collection and identify aid needs. Additionally, Mr. Allen is providing a grant to NetHope to further connectivity throughout Liberia, Guinea and Sierra Leone. This initiative is part of Mr. Allen’s remarkable $100 million commitment to tackle the Ebola crisis.

As I drove home on Saturday, I had a chance to reflect a bit on the event, this initiative and the broad collaborative efforts to meet the ongoing challenges of the Ebola outbreak.

First was simply an appreciation of the profound commitment of philanthropists who have responded with incredible generosity to address this emergency - none more so than Paul Allen. In many ways, the Ebola outbreak is a unique crisis. It’s evolving and ongoing -- unlike an earthquake, tsunami or hurricane it lacks the clarity of a moment in time that immediately coalesces response from the global community. It doesn’t necessarily provide the stark images of collapsed buildings or visibly wounded victims that help catalyze donations from millions of individuals worldwide. Those factors have made the commitment of foundations - and the private sector - all the more important. Philanthropists like Mr. Allen have responded with a true understanding of the urgency and scope of the crisis. So too have leading technology companies like Microsoft, Facebook, Google, Cisco and others, who have generously provided both contributions and expertise to support the efforts of NetHope, our member NGOs and many other response organizations working in West Africa.

Second, initiatives like this are not just a reflection of the immense generosity of Paul Allen and others, but also their genuine appreciation of the complexities of this crisis and thoughtful approach in understanding what’s needed to support frontline response efforts. Technology is a crucial enabler of effective emergency response efforts, but it’s not simply a matter of shipping equipment around the world and assuming that will help. Context matters to ensure genuine impact on the ground. So Mr. Allen and team have engaged UNMEER and other organizations on the frontlines to ensure the technology - including the software we were loading last weekend - meets the specific needs of the frontline aid workers who will utilize these smartphones. Likewise, they understand that these mobile devices will only enable aid workers if backed by a stable communications network. The grant to support for NetHope will allow us to support priority connectivity needs of international NGOs and community organizations on the frontlines -- both in the immediate term and by working with mobile network operators in the region to bolster local networks that will strengthen communities short and long term. Broadly they understand that complexity requires deep collaboration with governments, NGOs, the private sector and other local stakeholders.

Finally, I was once again proud of how our community in Seattle rallied to support those in need in West Africa. We are of course blessed with some of the world’s leading philanthropists who have made enormous contributions to this effort. I was no less inspired by the broad swath of volunteers who braved the cold and gave up their Saturday to do their small part in the fight against Ebola -- from students to senior citizens, NetHope colleagues to a band of merry Seahawks boosters wearing jester’s hats and similarly outlandish headgear.  Their collective commitment kept spirits high even amidst a clear recognition of the seriousness of this tragic and ongoing crisis.

As the saying goes, it really does take a village - a global village - of heroic responders and community members on the front lines, visionary philanthropists and Seahawks fans in funny hats!

We’re enormously grateful to them all.