In Leverkusen-Opladen, a small community near Cologne in Germany, employees of the Kolping-Bildungswerk training center help young refugees prepare for and find a job or apprenticeship in Germany. 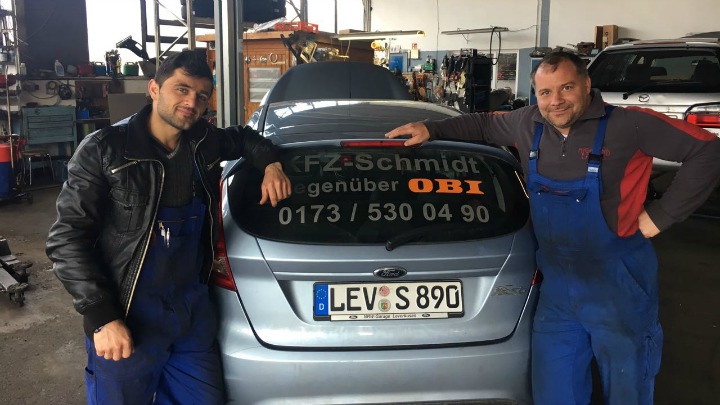 In Leverkusen-Opladen, a small community near Cologne in Germany, employees of the Kolping-Bildungswerk training center help young refugees prepare for and find a job or apprenticeship in Germany. They offer German lessons, tutor the refugees in math and other topics, and arrange internships. Currently,  seven young men between 19 and 23 are completing internships, or are about to start an apprenticeship or vocational training program. These young men are using Google Chromebooks that were donated to Kolping-Bildungswerk Köln training centers through NetHope's Project Reconnect. The Chromebooks help young refugees work towards their goal - a job in Germany.

Heinz Kappertz and Peter Brenner are employees of the Kolping-Werkstatt, or workshop, in Leverkusen-Opladen and support the seven young refugees through the work-study program. Heinz and Peter proudly share the story of Daham, a young Iraqi who successfully landed an apprenticeship as a car mechanic.

In December 2016, Daham received an internship offer at KFZ Schmidt, a small car repair shop, as part of the initial qualification phase of the program. The objective of these six-to-12-month internships is to introduce participating companies to potential candidates for multi-year apprenticeships. Daham (at left in the photo above, along with Ralf Schmidt, owner of KFZ Schmidt) had already taken part in a language course and could communicate in basic German. However, it quickly became clear that Daham’s conversational German was not yet sufficient to succeed in an apprenticeship.

Daham, like many other refugees, went to school irregularly in Iraq, and only for a short time. He had to catch up in a lot of subject areas, including math, which is important for a career as a car mechanic. Daham was given a Chromebook to intensify his language studies and improve and practice his language skills. At first, using the Chromebook was difficult for him. He was comfortable using a smartphone, but using a computer with a keyboard was not familiar to him.

Together with a tutor, Daham searched within the Internet course "Ich-will-Deutsch-lernen.de" and found online exercises on speaking and phonetics. Regular practice helped him overcome his insecurity and become comfortable with conversational German. In addition, Daham uses the Chromebook to improve other skills, such as listening, reading comprehension, and writing. Every Wednesday, Daham attends a vocational school to take lessons in math, and then practices online to get ahead quickly. He is also using his borrowed Chromebook to prepare for his written driving test.

"I would very much like to stay in Germany and have a job," says Daham. "The Chromebook helps me a lot because I can study at home." And the ongoing conversation practice has been worth the effort. Daham's conversation skills have improved significantly - so much so that he will begin his apprenticeship as a car mechanic at KFZ Schmidt. He has already signed the contract.

If this story inspires you and you would like to invest in NetHope’s work supporting refugees like Daham, we welcome your donation.