Despite the tragedy, this is the type of situation where the collaborations, expertise, and disaster response experience of the NetHope community, introduces a bit of light—and valuable connectivity—to a bleak scenario. 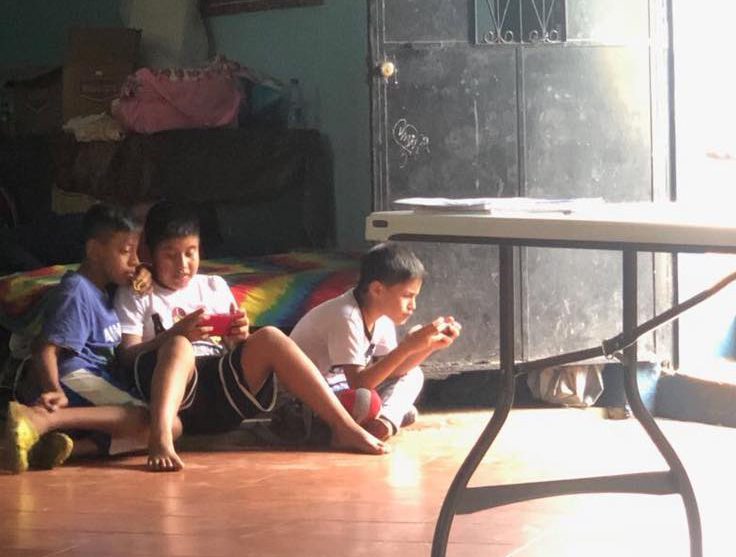 Guatemalan children affected by the eruption of Volcán de Fuego partake of the connectivity provided by NetHope in their temporary shelter location.

Ingolfur Haraldsson knew the look. He had seen similar expressions on the refugees streaming into Greece—they told of anguish, fear and uncertainty of what was to come.

Haraldsson, a communication specialist with NetHope, was in Guatemala surveying the devastating results of the June 3 volcanic eruption of Volcán de Fuego near El Rodeo in the Escuintla municipality. The blast, which blew material more than three miles into the air, brought down deadly flows of ash and toxic gasses that spread into the surrounding countryside. More than 110 people died in the cataclysm and nearly 200 more were reported missing.

“Many of these peoples’ homes were completely wiped out.” said Haraldsson. “They also, in many cases, had no way of learning what was happening or what may have happened to nearby friends and family. That’s why it was so important to restore connection to the internet and phone service.”

Temporary shelter had been set up by the government and nearly 3,500 people were displaced by the blast. Haraldsson said one shelter swelled with more than 850 people. When Harraldsson arrived, several NetHope member organizations were already on the scene providing immediate aid, including NRC, Plan International, and Save the Children. Tech partner Cisco Tactical Operations (TacOps) also responded rapidly, providing technical assistance as the reach of the disaster broadened.

Haraldsson was in Guatemala on reconnaissance, making connections among NetHope member organizations and local Internet Service Providers (ISPs) to arrange for connectivity for responders and residents of the temporary shelters. Funding for this project came via a grant from the Center for Disaster Philanthropy.

Through his guidance, a six-month guaranteed connectivity agreement was arranged with these ISPs, giving aid responders vital communications to arrange for supplies and medical assistance for people whose homes were destroyed by the ash and mud flows.

“Connectivity for aid responders is vital,” noted Haraldsson. “Having reliable communications in order to coordinate food, water, and shelter for those displaced by the volcano is dependent on good communication. Fortunately, NetHope with its members and tech partners was able to survey the situation and begin preparing connectivity hubs at the shelters.”

By the beginning of the last week of June, Haraldsson and his team of NetHope members, including Christian Alfaro from Save the Children, Matt Altman from Cisco TacOps, and Jose Arsenio from Cisco Puerto Rico, had set up connectivity at two shelters in Escuintla, one containing 842 people and the other with 574. More surveys of other shelter sites were to continue in the days to follow, setting up more connectivity hubs as need demanded.

Despite the tragedy, this is the type of situation where the collaborations, expertise, and disaster response experience of the NetHope community, introduces a bit of light—and valuable connectivity—to a bleak scenario.

5 learnings for connecting women to smartphones