Almost one year ago today, Hurricane Irma smashed into the leeward Caribbean Islands of Barbuda, Saint Martin, Anguilla, and the Virgin Islands. 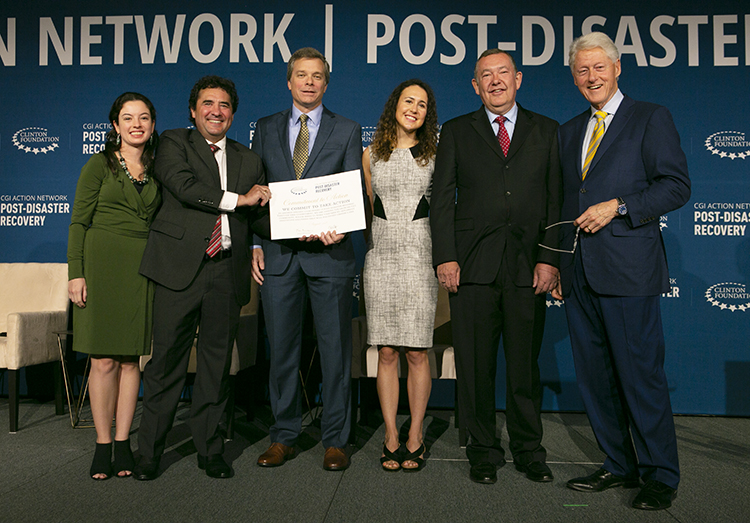 Above: NetHope's Frank Schott, standing next to President Clinton, at the recent Clinton Global Initiative event.

“Preparation through education is less costly than learning through tragedy.”

Almost one year ago today, Hurricane Irma smashed into the leeward Caribbean Islands of Barbuda, Saint Martin, Anguilla, and the Virgin Islands. In the days following the hurricane, NetHope and its members and partners responded to restore communications capabilities in support of recovery efforts.

Little did we know at the time that Hurricane Maria was forming and would soon devastate Dominica and Puerto Rico as well. NetHope was asked by the government of Puerto Rico and FEMA to support their work in Puerto Rico. NetHope shifted operations to the island territory and began a six-month effort to support emergency responders and vulnerable communities that had lost power and communications.

The learnings from this experience clearly led to one conclusion: being prepared for the inevitable next hurricane would be the best course of action to lessening its impact.

To that end, in January 2018, NetHope and its partners began making plans to prepare for the hurricane season that is now upon us, as well as other emergencies that might affect the Caribbean.  Over the past eight months, NetHope prepositioned almost $2 million of equipment in Panama City and San Juan and grew its roster of trained volunteers to include almost 200 telecommunications and logistics experts. An intensive hurricane simulation with our members and partners took place in Panama, and we further forged working partnerships in the region with Internews, the UN’s Emergency Telecom Cluster, and CDEMA (the Caribbean equivalent of FEMA).

The strength of NetHope is evident in these partnerships; the collaborations and relationships created make a formidable breakwater against the devastation caused by hurricanes. Though no one can, of course, decrease the eventuality of these storms, by being prepared through a network of trained and ready responders, we can at least help alleviate the impact on those affected, returning their lives quickly to a state of some normalcy.

Symbolically, the culmination of all this work occurred last month during a meeting of the Clinton Global Initiative. I had the privilege of joining some of NetHope’s partners, including Facebook, The Patterson Foundation, Red 52, and Rocky Mountain Institute, on stage with President Bill Clinton during the event. It was an honor hearing President Clinton recognize NetHope’s Commitment to Action through the CGI Action Network. I reflected on how far we have come this past year in advancing our preparedness agenda, not just for the Caribbean, but also globally. So many dedicated NetHope staff and partners made it all possible. The list of all those responsible would be long, but special mention goes out to Cisco and Microsoft, longtime supporters of NetHope’s work and positive forces behind making all this work come to fruition.

I have been asked countless times, “What was President Clinton like?” First, he looks and sounds great.  I can still hear his relaxed and thoughtful oratory coupled with a hint of Arkansas accent. While the events onstage were truly inspiring, it was perhaps the short encounter backstage that impacted me most when he said, “We are grateful for what you do.” I could not have been prouder of the entire NetHope team and our partners. We truly stand on your shoulders.