The nonprofit organization, Refugees Emancipation, has installed internet access and equipped the welcome center, a big residential facility where refugees live when they first arrive in Germany, with Google Chromebooks received through Project Reconnect. 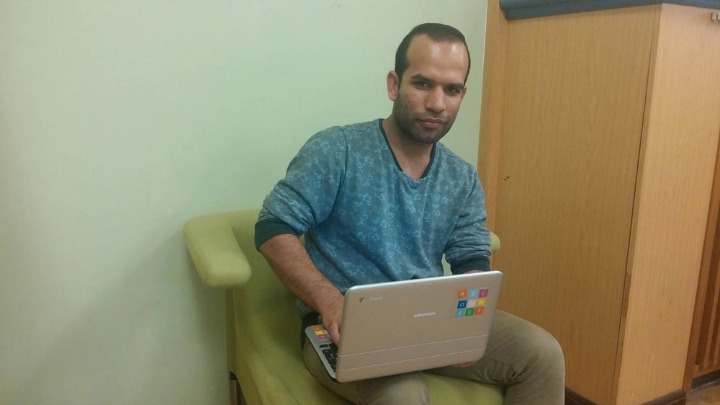 On the ground floor of the refugee welcome center in Potsdam, Germany, a small internet café invites residents to research or study online. The nonprofit organization, Refugees Emancipation, has installed internet access and equipped the welcome center, a big residential facility where refugees live when they first arrive in Germany, with Google Chromebooks received through Project Reconnect.

Refugee Emancipation, which itself is led by refugees, works with new arrivals to access online resources and has already equipped nine refugee homes and other facilities with internet connectivity and computers. Residents of the welcome center in Potsdam can borrow the small internet-based Chromebooks for up to four weeks to use in the internet café, and even outside the refugee home.

At a small launch event in February, volunteers from Refugees Emancipation explained how the Chromebooks work and potential uses. Some of the refugees already had very specific ideas.

Osman Zaman, pictured above, plans to use the laptop to prepare for a job. In his home country of Afghanistan, Osman was a cameraman and made videos for online news. He would like to do that in Germany and plans to use the Chromebook to create a resume and cut some videos. He also wants to further his language skills. After two years in Germany, Osman speaks German very well, and his language certificate recognizes his ability to cope with everyday situations. For Osman, this is not enough: He wants to prepare for advanced-language exams. With an advanced-language certificate, he could apply for a job in his new country.

Masoud Faqiri, 17, waited outside the door of the internet café before the launch event. Masoud (pictured left) arrived in Germany from Afghanistan six months ago, and, like Osman, has diligently learned German. In conversations, he translates for his mother, who fled with him. Masoud knows exactly what he wans to use the laptops for: watching YouTube tutorials to further improve his German. He has taught himself to read, write, and speak German with these videos.

Masoud hopes that he will soon be allowed to attend school. "I want to become a dentist," he said, "and study in Germany." The first step is admission to a German school. Until then, Masoud will continue to study German by himself — at the internet café in Potsdam, and with a borrowed Chromebook.