Refugee family: ‘Will we have Wi-Fi today?’

Despite frequent movement between camps of varying conditions and a lack of clear process, the family is patient and resilient. 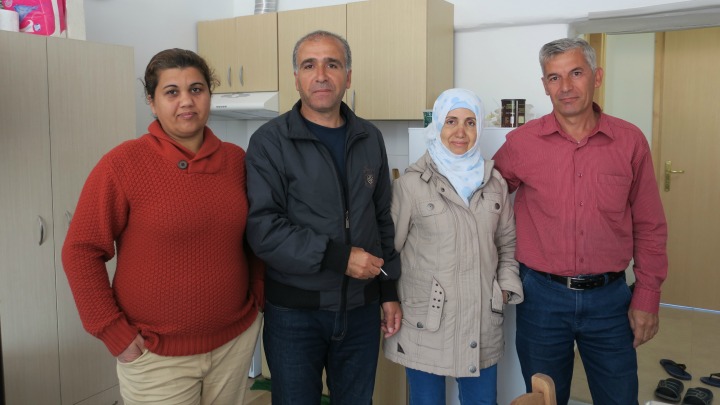 Editor’s Note: Kelli Hogan, a marketing manager at Google, was a member of the 12-person NetHope Team K deployment to Greece and its official mission storyteller.

Kavala, Greece — A group of hopeful refugees gather around a NetHope team scouting a location for a new access point. “Will we have Wi-Fi today?” asks Salha and Ali (second and third from right in the above picture). Their English is perfect and their anticipation is palpable. After explaining our objective for connecting the site in Kavala, Ali invites me to sit down with them in their room.

Ali and Salha are brother and sister. The two siblings left Aleppo with their children, and their respective spouses, Fahima and Hamed, in 2016. The families are Kurdish, and for several years, their town was unaffected by the civil war, but as soon as their homes were vulnerable, they decided to leave. The two families traveled for 10 days through Turkey, and then migrated onward to Greece.

Because they arrived after March 2016, when the EU and Turkey struck a deal attempting to stem the flow of migrants, the two families aren’t sure what the future holds for them. The new construction at Kavala camp is the best accommodation they have had yet, so if they must wait, they prefer to do it here. They also prefer to stay together as a big family. Ali, a pharmacist, is helping Salha and Hamed care for their eight-year-old son Rami, who has epilepsy.

Despite frequent movement between camps of varying conditions and a lack of clear process, the family is patient and resilient. While Ali had been studying English in Syria, Salha has taught herself in the camps. She's trying to teach her children English and Arabic, as well. The whole family spends a lot of time together. They play cards and socialize with other families in the camp. The internet - when available - plays a huge role in their daily lives. The two families have lived in many camps where connectivity was unreliable and unaffordable. Yesterday, the camp briefly had connectivity from an unknown source, but then it suddenly went down, leaving everyone exasperated. Today, they are invigorated at the sight of NetHope and look forward to a free and stable internet connection from now on.

With free Wi-Fi, the parents will resume their use of WhatsApp and Facebook Messenger to stay in touch with their family and friends in Syria, Sweden, and Germany. They'll also listen to music on YouTube and read the news about what’s happening in Aleppo. They've grown tired of the constant war. Their children, Salha assures with a smile, will jump back into their favorite games: Farmville and Candy Crush. "Every day, Rami holds out his tablet and asks me: 'Do we have Wi-Fi?'" By the end of the day, the answer is "yes."

The NetHope-led Syrian Refugee Connectivity Alliance was made possible by the support of Cisco, Facebook, Google, Microsoft, The Patterson Foundation, and UNHCR.