After a crisis, iNGOs often lack the resources to leverage technology solutions. NetHope steps in so they can focus on critical mission delivery. 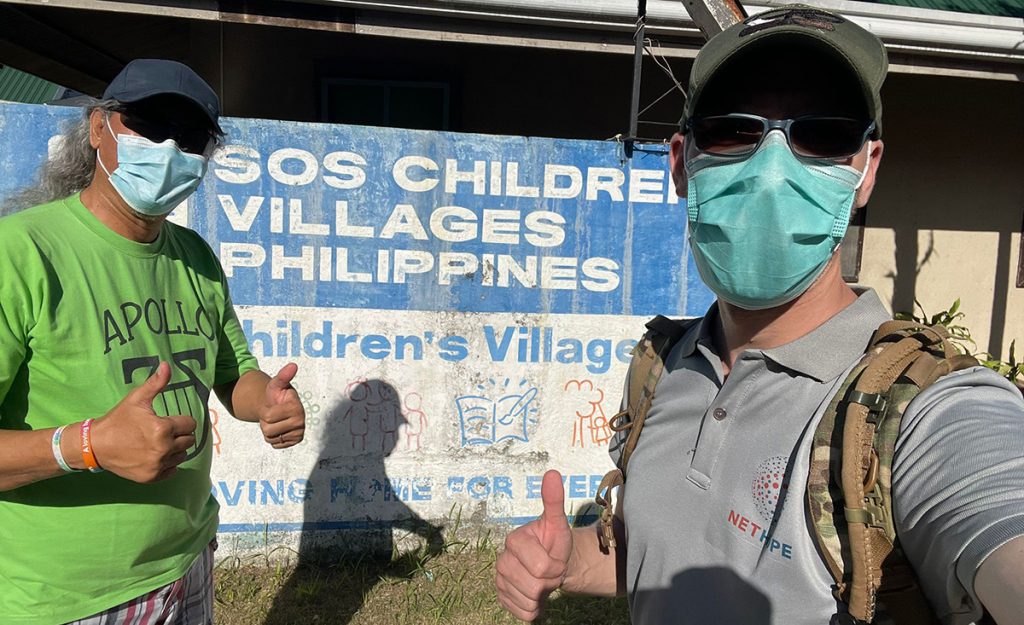 NetHope’s Emergency Preparedness and Response Team supports our Members in the field, so they can focus on critical mission delivery without interruption. From our first emergency mission in 2002 --connecting 22 humanitarian organizations and bridging a broken telecommunications infrastructure in the aftermath of Haiti’s devastating earthquake -- to disaster relief efforts today, the program has had one constant guiding principle – that in the face of and aftermath of crises, international NGOs often lack the necessary human and financial resources to leverage critical technology solutions and build capacity on their own. That’s where NetHope comes in.

Now, the program is evolving in response to the harsh realities of an already changed planet. Climate adaptation is urgent and unavoidable and investing in local partnerships is key to building and sustaining long-term resiliency for inevitable disasters. These truths underpin the cross-cutting nature of NetHope’s work.

Through the NetHope Rapid Response Fund (RRF), we can mount a relevant, timely, and targeted response to any humanitarian emergency in which lives and/or livelihoods are at grave risk. The fund also enables us to respond to slow-onset crises, like famine or drought, a significant deterioration in an existing emergency, or a relatively localized or creeping emergency that nonetheless has significant humanitarian consequences.

When disaster strikes, we deploy our Emergency Response Team to conduct an assessment, from which we build a full-scale deployment plan of action in concert with our Member organizations on the ground and their local partners. We then may seek longer-term, mission-specific support for critical initiatives that directly alleviate the suffering of people and communities impacted by disasters.

Here are some recent examples of our Emergency Preparedness and Response Program in action:

In December 2021, Super Typhoon Rai, locally known as Odette, struck the Philippines with heavy rains, landslides, and widespread flooding. The devastating storm killed hundreds of people, displaced hundreds of thousands and affected nearly two million. Typhoon Rai affected regions which do not normally experience natural disasters and therefore are less prepared – many communities had not prepositioned emergency supplies. The typhoon destroyed bridges and left many roads impassable, knocking out power and internet connectivity in more than 60 cities. Without reliable communications, both affected communities and first-responders are at greater risk and the work that needs to get done takes much longer. The concomitant resurgence of COVID-19 was an added hardship.

NetHope’s Typhoon Rai Response was a nine-month collaborative project to coordinate and enhance the telecommunications capacity of responding NetHope Members and other humanitarian agencies, including local government, by deploying five secure Wi-Fi networks and distributing seven satellite phones and five radio kits for use in Cebu, Bohol, and Leyte.

NetHope completed its assessment mission in late December and emergency response activities at the end of January 2022, having successfully installed four out of five secure Wi-Fi networks and distributed seven satellite phones and five HAM radio kits. For the remaining seven months, NetHope focused on monitoring the installed networks.

Over 11 million beneficiaries were served by these four Wi-Fi networks sites, enabling access to essential human services such as education, police, fire, and ambulance services, public works, healthcare and more.

The Typhoon Rai response is now leading to a major capacity-building effort in the Philippines by NetHope, its Members, and operational partners, which will take place during 2023.

Record-breaking monsoon rains in Pakistan in July and August of 2022 caused the most severe flooding in Pakistan’s recent history, affecting all four of the country’s provinces and 33 million people. Many areas experienced four to five times the 30-year average rainfall for this period.

The sheer scale of the impact of this crisis is becoming clear. Families have been displaced, infrastructure and rural homes damaged, and the agriculture sector, the main source of livelihood for those living in the provinces affected, has been decimated. Only 20% of the affected population received assistance from the humanitarian community. That figure is even smaller in the hardest-to-reach areas.

In September, NetHope deployed an Emergency Response Team to assess the situation and coordinate among 31 NetHope Members present in affected areas.

While most of the connectivity has been restored in main population centers, the infrastructure remains vulnerable. Due to the extensive flooding, new field sites are needed to implement and coordinate response and recovery efforts in remote and underserved areas.

The situation for millions remains dire and will continue to deteriorate this winter without homes, livestock and food reserves, and no harvest for nine months. Waterborne diseases, food insecurity, and malnutrition are increasing and threatening recovery and resiliency efforts.

With secured support, NetHope will prioritize the procurement, shipment, transportation and installation of up to 35 field office network hubs where capacity does not exist, inclusive of technical support and training.This will enable three NetHope Members to set up new field offices for the management of sustained relief and recovery efforts in remote and under-served areas in up to 35 flood-affected locations across 20 districts in Khyber Pakhtunkhwa, Baluchistan and Sindh.

These Members are working with 25 local implementing partners to reach 40,000 families or 280,000 people with their flood response programs. This vital support will enable critical programs – such as multi-purpose cash assistance, provision of shelter materials, water, sanitation and hygiene (WASH), health services, and livelihoods support - to continue reaching flood-affected communities and further their impact.

How You Can Help

NetHope’s commitment to collaboration and harnessing the power of technology for the good of people and planet is unwavering, even as we adapt our programs to meet the challenges of a changing world.

We welcome contributions to the NetHope Rapid Response Fund, which enables our Emergency Response team to respond quickly in the immediate aftermath of a natural disaster or humanitarian emergency.

To contribute or for more information, please contact Molly Gascoigne, NetHope’s Senior Director of Partnerships and Development. You can also make a tax deductible contribution to NetHope.