Together, we can provide hope for those who need aid, and those who deliver it in Puerto Rico and throughout the Caribbean. 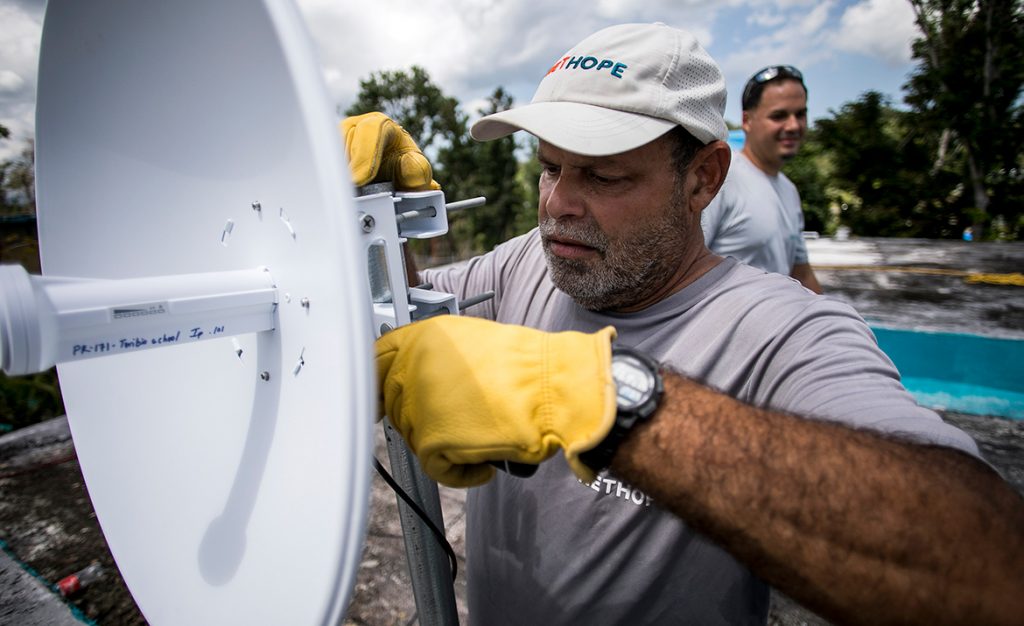 The one-two punch of two category 5 storms, Irma and Maria, devastated the remote islands spread throughout the Caribbean. With damage from both hurricanes estimated at over $100 billion, the long-term impact, particularly in Puerto Rico, revealed the fragility of existing infrastructure and response readiness.

Maria wiped out more than 90 percent of Puerto Rico’s existing power and communications grid for more than 3.4 million people, and further complicated rescue and recovery efforts which rely on connectivity to flow information effectively to emergency responders and affected communities.

Driving through San Juan at night for the first time was a shock. It was just so dark, in a place that is usually full of light. And so many people were still struggling to get enough food, water and medical care—especially in the more rural, harder to reach areas.

The 2017 hurricane season, though devastating, provided a valuable learning opportunity. The lessons prompted NetHope to create a more comprehensive hurricane response system to fortify Puerto Rico and minimize the future loss of life and destruction from hurricanes and other threats proactively to the entire Caribbean region. NetHope also strengthened bonds with existing partners and leveraged these relationships to create connections with FEMA, CDEMA, Caribbean government agencies, and other humanitarian aid organizations.

NetHope has committed implementing partners, who are all-in with their investment, providing such essentials as funding, personnel, volunteers, data expertise, and technology. They include: Cisco, Facebook, Google, Microsoft, Ericsson Response, Red52, The Patterson Foundation, Claro, Save the Children, Samaritan’s Purse, and MapBox. To achieve our goals and better safeguard the entire Caribbean region, NetHope needs more partners.

By joining the NetHope community, together, we can provide hope for those who need aid, and those who deliver it in Puerto Rico and throughout the Caribbean.