On World Refugee Day, the United Nations High Commissioner for Refugees reported that the global population of displaced people had increased to a staggering 70.8 million individuals... 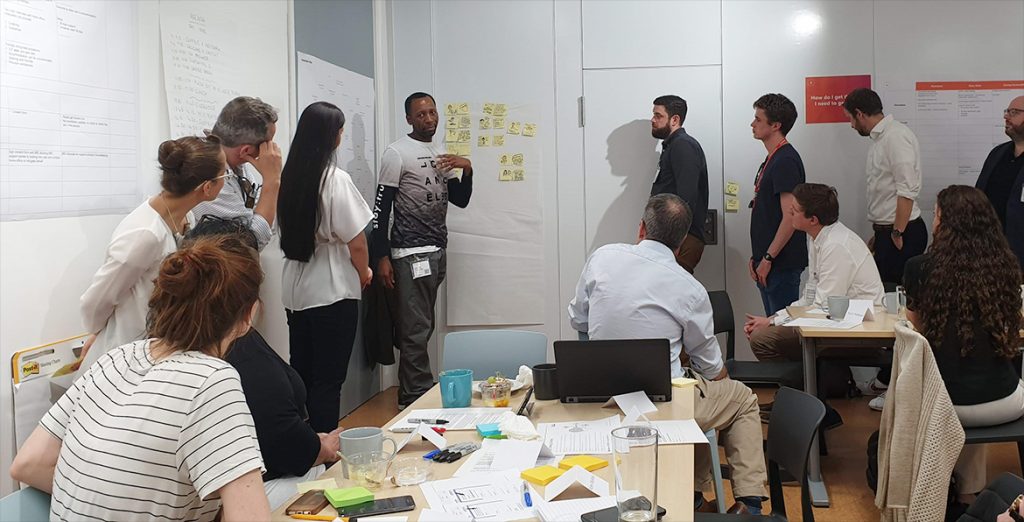 By Jean-Louis Ecochard, The Center for the Digital Nonprofit

On World Refugee Day, the United Nations High Commissioner for Refugees (UNHCR) reported that the global population of displaced people had increased to a staggering 70.8 million individuals. A few days later, the British Red Cross (BRC) set upon re-imagining how to better serve refugees and asylum seekers in the United Kingdom (UK).

According to UNHCR statistics, by mid-2018 there were 124,018​ refugees, 33,035​ pending asylum cases, and 106 stateless persons in the UK. The UK government migration statistics for the year ending March 2019, reported that 26,547 asylum applications were made in the previous 12 months, an 8 percent decrease from the previous year. The BRC supports vulnerable refugees and asylum seekers. They provide refugee services in 58 towns and cities across the country.

Of course, facts and figures are no substitute for the poignant human stories of refugees, and this is why the BRC invited refugees and asylum seekers to join a team of British Red Cross leaders in re-imagining four challenges facing those seeking sanctuary in Great Britain:

It took weeks of preparation to select these four questions out of a long list of needs that the BRC seeks to address. A global team from Avanade’s Innovation Advisory and Studio services composed of Hardik Amin, Amanda Young, Charlotte Fuller, Sofia Noriega-Bueno, and Shanaz Islam, led the innovation workshop. Innes Grant, UK Health & Public Sector executive at Avanade, joined in and inspired the group by presenting the art of the possible for case management using Microsoft Teams. This level of participative leadership shows how serious Avanade is with its Tech for Social Good initiative that was launched at the NetHope Summit last November and is now sponsored by Avanade’s upcoming CEO, Pamela Maynard. The workshop was sponsored by Microsoft Tech for Social Impact and attended by Craig Parker, EMEA strategic account director.

As consumers we witness, and often benefit from, new ways of living and working made possible through technology. Many of these innovations, such as navigation by GPS, make our world easier. There is a tugging-at-the heartstring of our nonprofit organizations that comes from the tension of knowing that we should do better in this modern digital world, and the painful reality of being so overwhelmed by the present-day work that we cannot even lend a thought to changing. The IDEA process allows this tension to be released by creating a safe and creative space for nonprofit leaders to re-imagine aspects of their mission with key stakeholders.

In parting with the traditional workflow used in other IDEA workshops, Avanade led the BRC in mapping the as-is journey of our four challenges, instead of first developing the personas engaged in these experiences. With so many refugees participating as voice ambassadors, the persona exercise could temporarily be postponed. Our as-is journeys quickly became steeped in the reality of lived experiences and emotions, rich in authentic moments, at times bringing tears to our eyes.

Layered over the journey templates affixed on the walls, the row allocated to pain points quickly overflowed with post-its. This field of sticky notes became a sad tableau of the integration struggles of people. The list of pain points seemed endless, including confronting the day-to-day practicality of navigating a world labelled in a foreign language, managing the complexity of scheduling the conflicting timelines of multiple government agencies, and ultimately finding trust at the end of a journey of betrayed confidence.. Language issues and dehumanizing processes were consistent themes shared across all four challenges. “We know our client groups,” said Rad Fortune-West, development and fundraising advisor at the UK Refugee Support and Restoring Family Links. “We know 60 percent are refugees. They have so many certificates on their walls and still no work,” she continued.

Indeed, consider that in all countries, policies, procedures, infrastructure, commerce, and even entertainment is foremost designed for the common capabilities of its citizens. Expressed in the country’s language, these services expect basic levels of proficiency, such as being able to take public transport to get to them, capabilities that refugees and asylum seekers often lack. To the refugee and asylum seeker, this host world is alien. Inside this world, they are outsiders, and illiterate people are made even more vulnerable because the UK has a 99 percent literacy rate and thus is designed for people who can read, write, and count. And if this was not a difficult enough situation, imagine how one might feel when, plunged into a culture of social media snapshots, they fear that their appearance online could result in the torture of their family back home. “The key thing is that people’s dignity be maintained,” said James Piriou, operations manager for Refugee Support (South West).

These are the realities of the asylum seekers’ journey that our teams sought to turn around for the better. To keep our minds away from rushing in to solutions, we clustered pain points together into themes and framed these as “how might we …” questions. How might we create a more humane and dignified process? How might we collate all existing information? How might we bring refugees and asylum seekers the ability to leverage the experience of others? How might we empower refugees to create and build pathways to employment? How might we help asylum seekers understand their rights and access support?

Redefining innovation
After an inspiring presentation from Lilian Tse of Accenture’s Fjord on how developing economies are redefining innovation, we started to write down the characters of our personas and the concepts for our final solutions. The use of the nonprofit business model canvas came in handy to focus our minds on impact metrics, stakeholders, and costs.

Having had to empathize with the terrible challenges encountered by refugees and asylum seekers, we were emotionally drained yet at the same time excited that our emerging solutions could make a big impact.

The second day started on a bright note by defining the future journey of our personas. In this process, we sought to relieve their pain points by rolling up our sleeves and diligently working on solutions. To fuel our creativity, we browsed “a wall of inspirations” created by the Avanade team that included cases, examples, and initiatives from other nonprofits, intermixed with the touching stories of famous refugees who have shaped our world (e.g., Bob Marley, Albert Einstein, Jackie Chan). This was intended to push the boundaries of innovation and make participants think outside-the-box. In addition, NetHope presented digital transformation in healthcare and in global nonprofits serving refugees. As observed in previous workshops, organizations have the means to solve their challenges, but they are not integrated in useful ways. “The data already exists but it is in different places,” explained Mekdes Alemayehu, service manager, Refugee Support Service.

Defining solutions
The day concluded with our four teams presenting solutions to a panel of grant-making judges. These potentially powerful solutions and their ranking will be documented in an upcoming dream book. They are:

Collectively these solutions could be combined into a single platform, guiding asylum seekers and refugees settling in Great Britain with dignity and enabling them to thrive in their communities. Through their native language, Unite could bring comfort, while Ask Marianne and Refuguide could advise asylum seekers and refugees in their respective journeys via a seamless interactive experience. Food for Thought could then usher in new purpose and economic growth to their lives.

“The last few days have been so engaging,” noted Alex Fraser, UK director for Refugee Support and Restoring Family Links.

To be sure, as we worked on these challenges, we discovered many valuable actions that could be put in place quickly and bring dignity and humanity to refugees in Great Britain.

“We are very excited [at BRC] about digital technology and the use of Design Thinking to bring fresh perspectives and challenge current assumptions—recognizing these as big, difficult challenges we are working on,” said Adam Rowlands, director of Digital & Innovation, in closing out the workshop. “That is why it has been really powerful to spend this time working with Avanade, Microsoft, and NetHope to look at our refugee services.”