The overarching goal of the NetHope 2017 Device Challenge is to put more devices including phones, tablets, PCs and laptops, into the hands of end users in vulnerable communities via impactful humanitarian and conservation programs. 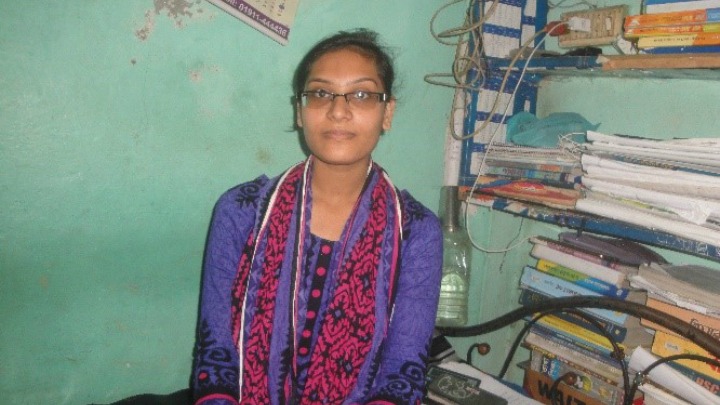 Sagor is 20 years old, and is the eldest of five children. He lives in a small room along with his two younger sisters and two younger brothers in the Mohammadpur slum in Western Dhaka, Bangladesh. His family, along with 1,800 other people, share 12 common toilets.

Four years ago, Sagor’s world was turned upside down when his father died of cancer. Like many young people who face the tragedy of losing a parent, Sagor took on the responsibility of finding new ways to provide for his family. Sagor went to work at local textile shops doing jari-chumki (hand embroidery), and assisted his mother, Reshma (both pictured below) by going to the wholesale market to buy clothes for her to sell.

In the same slum as Sagor, Swapna (pictured above) lives with her parents and two siblings. Swapna’s father works at local embroidery shops, but the demand for textile labor fluctuates, and his income is unpredictable. Swapna’s mother works at home, making paper bags to earn additional money. Despite their limited means, Swapna’s parents feel strongly that their kids should get an education. Swapna, 17, and her sister are currently enrolled in 12th grade; their younger brother is in 6th grade.

In 2016, Swapna heard about Save the Children’s local partner, Community Participation and Development (CPD), which runs youth clubs and computer trainings in in the community. CPD community mobilizers talked to her and her family and convinced Swapna to join a digital literacy course, where she learned to use computers and applications such as Microsoft Word, Excel, and the internet. Since then, she has become an active member of the CPD youth club.

CPD also runs a program called Empowering Youth Through Technology, which works to bring IT and Business Process Outsourcing (BPO) skills to at-risk youth in Bangladesh. Participants receive training in communication, basic computer skills, and finance and accounting systems -- all specifically tailored to the needs of the local BPO market. Save the Children received critical funding from the NetHope 2017 Device Challenge, which aims to put more digital devices in the hands of the world’s most vulnerable people by providing them with access to content and services that were not previously available.

Like Swapna, Sagor was an active member of the CPD youth club in the slum. There, he was encouraged by the staff to continue his education. He went back to school and is currently enrolled in the 11th grade, while simultaneously participating in the Empowering Youth Through Technology program. Sagor and his mother realize that it will be very difficult for him to continue his education with their limited income (around $60 per month). But he is encouraged about better prospects for his future, and also encourages others living near him to participate in the program. He and Swapna both began a course in IT/BPO, Finance and Accounting, on October 1. Sagor hopes to work at a BPO center someday, and be able to better support his family.

As for Swapna, she knows that learning new skills opens the door to more employment opportunities. She dreams of becoming a freelancer one day or getting an entry-level job in ICT. At the same time, Swapna wants to continue her general education so that she can build a better career. She does not want to get married early; she wants to help support her family, and one day, move them into a more spacious home.

The overarching goal of the NetHope 2017 Device Challenge is to put more devices including phones, tablets, PCs and laptops, into the hands of end users in vulnerable communities via impactful humanitarian and conservation programs. The program was created thanks to a $5.5 million grant award from Google.org, the charitable arm of Google. Grantees were selected from a highly competitive field of over 300 applications and include both NetHope members and other nonprofits.