Nashaly Alvarado, 22, has lived in Juana Diaz, on the southern coast of Puerto Rico, all her life. Before Hurricane Maria, she was unemployed and volunteering at a music camp. 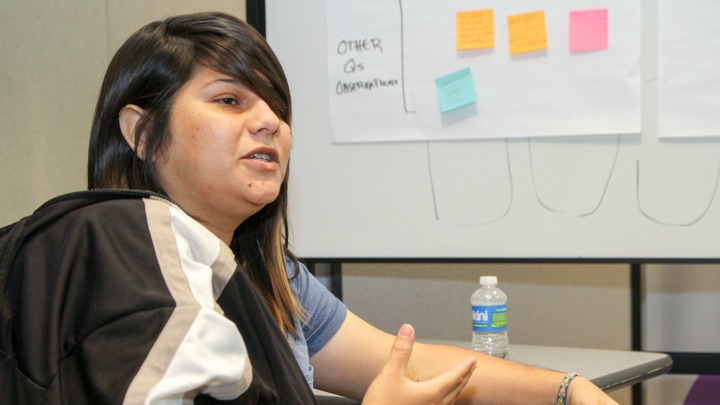 Nashaly Alvarado, 22, has lived in Juana Diaz, on the southern coast of Puerto Rico, all her life. Before Hurricane Maria, she was unemployed and volunteering at a music camp. A meteorology enthusiast, Nashaly was also watching the storm closely as it came out of Africa and moved with increasing ferocity toward her island. “When I saw the trajectory, I thought, it’ll be much stronger than people realize.”

She was right. In Nashaly’s neighborhood alone, nearly every house lost its roof, power lines fell, and roads were impassable due to the rain. “The rivers flooded and took the houses,” Nashaly recalls. The restoration of power to her neighborhood took 33 days, but there was still no cell phone service or Wi-Fi because the towers lacked power. “I was driving to places to get connectivity so that I could talk to my family in the States,” she said.

Nashaly is now working as a Citizen Reporter, as part of a new program created by NetHope in late 2017. Citizen Reporters are public citizens who identify community leaders and collect, report, investigate and disseminate news and resources via the Information as Aid Facebook page. Following is an excerpt of an interview I conducted with Nashaly while in Puerto Rico for the NetHope Learning Workshop in January.

Q: How did you find out about the Citizen Reporter program?

A: I saw a sponsored Google form. It said: ‘Do you want to make a difference in your community?’ I didn’t know what a Citizen Reporter was, but I filled it out. I figured, why not? I’m active in my community. I volunteer. And two days later, I got a call from Glenisse. (Editors note: Glenisse Pagan is the program lead for the Citizen Reporter program in Puerto Rico.)

A: I get up and check my notebook for my to-do list. In the first week, I went to the government offices to get information. Who better than them to know which communities needed help? So, I asked them: Where have you taken supplies, and where haven’t you been able to go? And then, I go to the communities where the government hasn’t been able to go. I walk around, look for people, give them my name, and ask: “May I interview you? How has your experience been? Is there someone nearby that needs help?” And then, I go help them.

Q: What does it mean to help people as a Citizen Reporter?

Q: How has your experience been?

A: It’s been amazing. Crime has been up in Puerto Rico, and people are a little bit hesitant, a little bit afraid. Once you explain why you’re there, people open up. I don’t ever guarantee that they’re going to get help, but it’s a chance to get exposure to the problems in the community. It is hard to talk to people and not know if they’re going to get help. People have been reaching out to me personally to help them.

Q: Can you give me an example?

A: Freddie Rodriguez is diabetic. He lost his roof, and he was working on his house after Maria. Freddie was getting the materials to fix his roof and he stepped on a nail. It was in his foot the whole day, but he didn’t feel it because of his diabetes. It got infected, and he had to go to the hospital. He’s the only man in the house, and he was upset: ‘My family, my kids, they don’t have a roof.’ So, he got impatient, and checked out of the hospital and went home to fix his roof.

I found out about Freddie, and his story was posted to the Information as Aid page. There were something like 800 shares. People were asking to help – they wanted to send food, groceries, and money. It took a while to get his roof fixed, but volunteers from around the island decided to pitch in and help.

Also, thanks to the story, the citizens started to put pressure on local authorities to take action, and they promised to go to Freddie’s house to help with the remaining things to be done.

Q: What has this experience meant to you?

A: It gives me another opportunity. This is a set of skills I didn’t have on my resume. I’m creating new experiences and creating new knowledge. Before, I was studying to be a dental hygienist. Maybe I could mix that with community work.