When NetHope began its mission to reconnect Wi-Fi and cell service in Puerto Rico in the days after Hurricane Maria, there were more than a few logistical challenges. 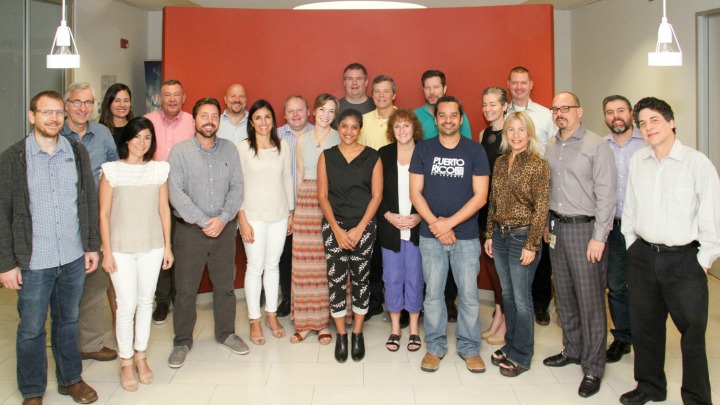 When NetHope began its mission to reconnect Wi-Fi and cell service in Puerto Rico in the days after Hurricane Maria, there were more than a few logistical challenges.

Basics – such as food, water, and shelter – were in short supply. Without power, team members sometimes used headlamps and paper maps to sketch out the next day’s mission. And with no generators to be had on the island, logistics coordinator Dagbjartur Brynjarsson sent a dozen emails before he found a man in Miami with a close connection to Puerto Rico. “He took his truck and trailer and drove up to Atlanta to buy the generators that we needed, and shipped them,” Dag recalled.

There were many stories of chance connections and fortuitous introductions during the recent NetHope Learning Workshop, convened in San Juan, Puerto Rico, January 18 and 19. The group of 27 people who gathered at Cisco’s San Juan offices included a diverse cross-section of NetHope staff and consultants; key industry partners, such as Cisco, Facebook, Microsoft, and Ericsson Response; academics from Harvard, Carnegie Mellon, Penn State, and MIT; and private foundations such as the McGovern Foundation and The Patterson Foundation.

The ambitious agenda for the two days focused on two tracks: the connectivity work NetHope has done, and continues to do in Puerto Rico, and the subsequent Information as Aid Facebook campaign and Citizen Reporters put in place once residents began coming back online. Each track drilled down into what happened, how it happened, lessons learned, and recommended improvements. Workshop participants heeded the directive to be honest and transparent.

“Knowing NetHope, we knew it was going to be roll-up-your-sleeves workshop focused on learning for the purpose of the greater good,” said Michael Corley, from The Patterson Foundation. “Every collaborative effort should undergo this type of review. If you don’t have these discussions, you won’t be in the position to be agile in the next disaster.”

One theme that emerged time and again during the workshop was the importance of relationships. In the early days and weeks of the response, there were few hotels in Puerto Rico open for business. NetHope’s Operations Manager, Madeleine Noe, secured apartments for the team over Airbnb. Living and working together forged strong bonds between team members.

“There was rarely any internet connectivity or TV, so we socialized. Whether you had some or no sleep, you were swept by the morning energy pushing you to give your best,” explained Rami Shakra, Director of Field Connectivity for NetHope. “Most days, no one had enough time to do debriefings or operational planning in an office so it would be late nights or early mornings when the teams could update one another, plan next steps, and summarize the days to share information with the external teams for reporting.”

There were clear themes around improvements, as well. Lack of power and a reliance on diesel-powered generators stymied several installations and led to quality issues with the Wi-Fi. Non-functioning airports made it nearly impossible to fly in needed equipment for several weeks. Regional hubs with preconfigured equipment would save time in future emergencies, as would standby agreements with technology partners.

Day one of the workshop focused on the details; day two included a full readout from both tracks on key takeaways. By the end of day two, the mood was positive, optimistic, and results-focused. “As I understand the problems people are having here, I can figure out how to build resilient systems versus getting them working as they fail,” said Jon Peha, who runs a research lab at Carnegie Mellon University.

“Too often, academics solve the wrong problem. The people in this room are solving the right problem,” he added.

Results from the NetHope Learning Workshop Puerto Rico will be compiled into an Implementation Guide, and posted on the NetHope Solutions Center in March. Check back for updates!