Indeed, after only eight months in Germany, Saeid is now working the trade he had pursued in Eritrea: carpentry. 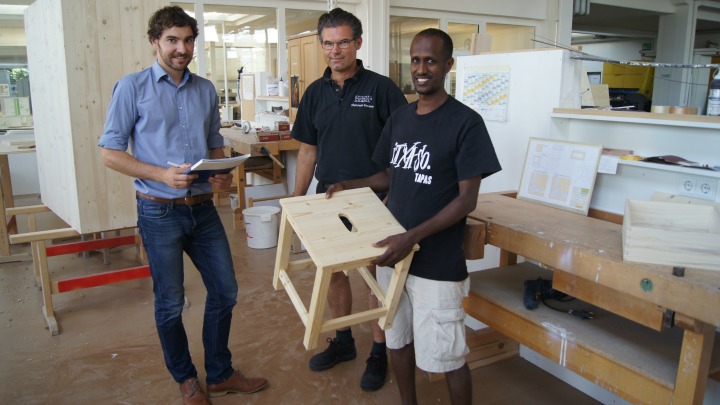 In 2011, Ibrahim Mohamed Saeid was working as a carpenter in Eritrea when the police suddenly appeared at his workplace to arrest him. Saeid’s brother, who had received a scholarship to study in India, had left Eritrea without permission, which, in turn, left his family vulnerable to punishment. And though he had committed no crime himself, Ibrahim Saeid was taken to prison. He spent nearly two years there, until a thunderstorm gave him the chance to escape.

Saeid and his fellow inmates were working on a farm when the storm broke. Recognizing an opportunity for escape, Saeid fled, crossing the Sudanese desert to Libya. From there, he negotiated an exchange with a human trafficker:  three months of farm work for a boat crossing to Europe. The agreed-upon three months became 1½ years, but in November 2015, the 34-year-old Saeid reached Landsberg am Lech, Germany, along with 15 other Eritreans.

Saeid heard about the opportunity to study German language and culture at the Volkshochschule (VHS) Landsberg am Lech, an adult education center about an hour outside of Munich. The Volkshochschule invited refugees and asylum seekers to learn about starting a new life in Germany, using computers and an online tutorial software from the Goethe Institute.

Before each session, participants would lug donated desktop PCs from the basement, set them up and connect them to internet. The 15 refugees were dedicated to learning everything they could about their new country. A few months later, the group had finished the tutorial and moved on to study German with Ich-will-Deutsch-lernen.de, the online language course produced and published by Deutscher Volkshochschul-Verband.

In May 2016, VHS Landsberg was able to expand its self-study program through a grant for Google Chromebooks from Project Reconnnect, an initiative launched by NetHope and Google.org. Saeid is now tutoring other refugees and helping them use the Chromebooks to study German. In his view, being able to communicate in the local language is the first and most important step for a successful integration and new life in Germany.

Indeed, after only eight months in Germany, Saeid is now working the trade he had pursued in Eritrea: carpentry. He has completed two internships and is now trying to get professional accreditation in Germany. The Chamber of Commerce and Industry is currently evaluating how much of his training and experience in Eritrea can be transferred towards a certification for  woodworking mechanics in his new country.

On arrival in Germany, many refugees are overwhelmed by the great and small liberties available to them. For example, drinking alcohol is taboo for Eritrean Muslims, but is freely allowed in Germany. Saeid’s recommendation to other refugees? "Pay no attention to what the Germans drink in the beer gardens, but learn about the professions in which they are working. Learn German and start proactively in a new life."