Save the Children is one of NetHope’s founding members, and has been a close and active collaborator ever since. Globally, Save the Children’s responses center around three pillars: child protection; education, and health and nutrition. 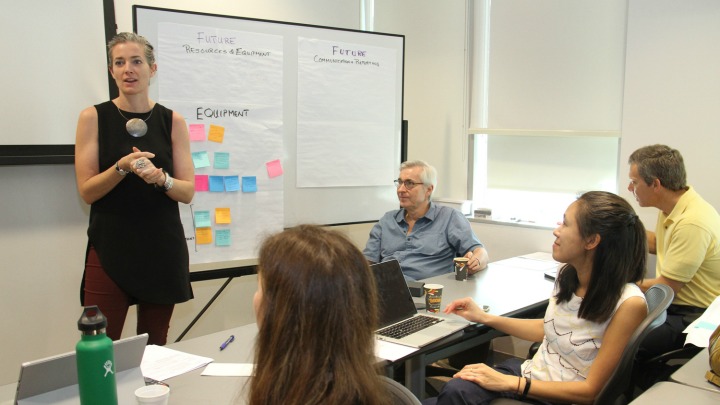 SAN JUAN, PUERTO RICO -- Hurricane Maria made landfall on Puerto Rico on September 20, 2017. Casey Harrity, Hurricane Response Team Leader for Save the Children, deployed from Washington D.C. to the island on September 24.

“In the first days after the storm, the entire island was without power or cell coverage; lines for fuel, ice, or ATMs could last 12 or 14 hours,” said Casey (pictured above, at a recent NetHope Learning Workshop in Puerto Rico). ”There were hundreds of shelters open across the island and 100 percent of schools were closed. From those early days, there have been huge improvements but there is still a long way to go in the recovery process.”

Save the Children is one of NetHope’s founding members, and has been a close and active collaborator ever since. Globally, Save the Children’s responses center around three pillars: child protection; education, and health and nutrition.

In a U.S. domestic response, Save the Children works closely with FEMA and the American Red Cross. Through these relationships, Save the Children had access to the Puerto Rico Joint Field Office located in the Convention Center in San Juan. This center became a logistics and coordination hub for response activities across the island in the wake of Hurricane Maria.

After Hurricane Maria, NetHope signaled to its members and partners that it planned to deploy to the island. Casey coordinated with Save the Children headquarters, and worked to connect Rami Shakra, NetHope’s Director of Field Connectivity (and former Save the Children staffer) with her operations team on the ground in San Juan. Casey also introduced Rami to key federal emergency contacts, as well. “Once Rami had the connections, he ran it from there,” she recalls.

Save the Children did more than just facilitate connections. In the early days after the storm, NetHope was arranging to ship tons of equipment from the mainland – and needed an address on the receiving end. Samaritan’s Purse, another NetHope member with a presence in Puerto Rico, supplied warehouse space initially. And Save the Children came through with a second warehouse, as well as shared office space, which NetHope is still using today.

Save the Children’s focus in Puerto Rico is centered on education, programs that support children’s emotional and mental health, and resilience. Since 2000, 10 percent of Puerto Rico’s residents have left the island, with the worst of the exodus occurring after the 2008 financial crisis. Before Maria, the Department of Education had begun a process of consolidating schools across Puerto Rico. With another 22,000 students leaving since September, additional schools will have to merge.

“We are concerned that children have lost learning opportunities – initially due to school closures after the hurricane and currently because many schools are still running only half days,” explained Casey. “As the process of consolidating schools continues, we want to ensure children are receiving the highest quality education but the schools will need support -- with transportation, classroom materials, and classroom management.”

Without power, there is no connectivity. And without connectivity, “administratively, the schools can’t run,” said Casey. For instance, to request a substitute teacher – a common issue since many teachers have left the island – schools need a tablet and an internet connection. Teachers can’t access resources and tools for the new project-based learning curriculum. And students are falling behind their counterparts on the mainland.

In 10 locations across the island, Save the Children is working to create model communities and child resilience plans. NetHope is providing connectivity to the schools and community centers. “We are working closely with donors and with the Department of Education to find creative solutions to the problems created in the wake of the hurricane,” said Casey.