Summit Day One: It's a NetHope family reunion!

Today was a terrific start to the NetHope Global Summit in Atlanta. 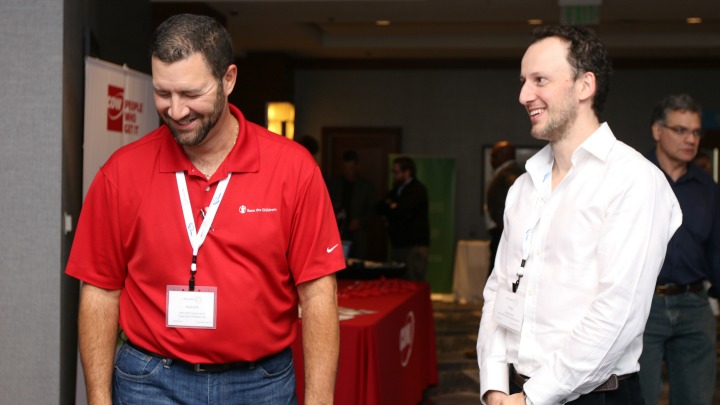 Today was a terrific start to the NetHope Global Summit in Atlanta. This is our biggest Summit to date, with longstanding members, vendors and partners, but also plenty of new faces. While there's no way I could possibly capture all of the powerful and insightful talks and session of this first day, here are a few highlights.

We got the ball rolling with a morning full of working groups. NetHope's Dr. Revi Sterling, who led a group on Gender, Empowerment and Technology, wondered why we were still talking about women's access to technology after all of the gains we've made. "Because it's still a problem," said one attendee.

It's still a problem, Revi said, because we've addressed most of the issues, like cost, barriers to access, and digital literacy. The one we haven't made a dent in? Culture, and patriarchal societies against women empowerment. "You've gotta be willing to go that extra mile to get the cultural issues ironed out," she said.

At the Connectivity and Infrastructure Working Group, Simon Gray, Vice President of Humanitarian Affairs at Eutelsat, encouraged NGOs to band together to influence satellite design. Because there is a growing need for humanitarian and disaster relief, said Gray, the NGO sector is the one offering the most growth for satellite companies. "You should leverage that buying power," he told the packed conference room.

I took the mic to talk about NetHope's impressive 2016 achievements, and our priorities in the coming year. These include operationalize the strategic plan; refine and grow programming; build operational capacity; expand industry partnerships; diversify financial support; and grow thought leadership.

And then, we got to meet our six newest members since we last convened in Copenhagen: Norwegian Refugee Council, Danish Refugee Council, HIAS, Pro Mujer, Medair, Welthungerhilfe. Jan Egeland, Secretary General of NRC said via video that NetHope "was the best news since Santa Claus," which is always good to hear!

We were also treated to an incredibly moving video from Pro Mujer, an NGO focused on women's health, microfinance and education. It told the story of a Pro Mujer client who received a microloan and opened her own hardware store. It was a powerful and real-world example of how a small investment can make a huge impact.

On to the keynotes; the first from Jeanne Ross, Research Director and Principal Research Scientist at the MIT Sloan Center for Information Research. In her fascinating and highly entertaining talk, Jeanne discussed how successful companies (and NGOs) must choose either a customer engagement or digital solutions strategy, and either one requires a strong operational backbone. She called out real-world examples, including Nordstrom, Lego and an elevator company with high aims.

Jake Wood, CEO of Team Rubicon, outlined his tips for building scale, flexibility and resilience through technology. They are:

We wrapped up the day with a panel on digital transformation from the CEO's perspective, which I moderated. Panelists included Jake and Jeanne, as well as Derreck Kayongo, from the Center for Civil and Human Rights, Michelle Nunn, from CARE, and Jonathan Reckford from Habitat for Humanity.

I'm energized for the rest of the Summit, and I'm not the only one. Neal McCarthy, from Oxfam tweeted: "Once again, I'm leaving Day 1 of NetHope Summit with my hair on fire. Engaging, inspiring, empowering." Couldn't have said it better myself. Back at it tomorrow!