Young refugee is eager to learn, and give to others

Mirwais Mohammadi has a spring to his step and an energy that is contagious. 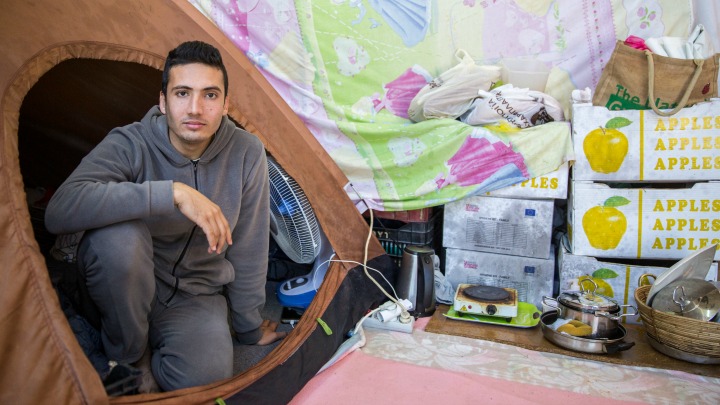 Editor’s Note: Ryan Chen, a motion designer/illustrator at Google, was a member of the 11-person NetHope Team J deployment to Greece and its official mission storyteller.

Mirwais Mohammadi has a spring to his step and an energy that is contagious. At 17 ½, he has the wisdom, leadership, and maturity of a man twice his age. And for good reason: He’s endured hardships and trials that most men never will. I met Mirwais almost immediately upon arriving at Elliniko, a refugee tent camp inside the former Athens airport.

Our team was a bit disoriented trying to determine how to wire access points amid a maze of tents. Mirwais saw our group and offered to help translate Farsi with the refugees. He was ecstatic when he learned about NetHope’s efforts to install Wi-Fi in Elliniko. We began talking, and he invited me to his tent for tea so I could hear more about his story.

Originally from Kapisa province in northeastern Afghanistan, Mirwais’s troubles started many years ago. His father was in the Afghan military and on an operation in Herat when he was captured by the Taliban and thrown in jail. His father remained behind bars for four years until the Red Cross came and facilitated his release. But this wasn’t the end of his troubles. The Taliban continued to threaten Mirwais’s father to join their group. If he didn’t comply, he and his family would be killed.

Mirwais went to private school to learn English and his father had to serve as a bodyguard to protect him from the Taliban. Fear hung over their heads every day. In February 2016, his family finally decided to make the arduous journey from Afghanistan to Europe. The family traveled by car to Iran, where they would stay for 10 days. From there they hiked through the snowy mountains for eighteen hours, crossing deep rivers in freezing temperatures, before finally reaching Turkey. They stayed in Turkey for a few days, and then braved the dangerous three-hour boat ride to the Greek island of Lesvos. His family was able to get to Athens in February of 2016. They made their way to Elliniko refugee camp, where his family has been ever since.

Ellinko is extremely congested with hundreds of tents packed into the small departure hall. The living conditions are bleak. Mirwais is making the best of his difficult situation by investing in his refugee community. At camp, he teaches the children English. When American volunteers arrived, he handed the class over to them so he could start teaching elders and younger children. He accompanies many other refugees to the hospital to translate for them. Mirwais craves learning and growth.

To be connected to the outside world, or acquire educational information material for himself and others, Mirwais would have to buy a SIM card, a portable memory chip used in mobile phones. “To listen to news about Afghanistan, about the European borders, about reunification with their families, we have to use the internet,” Mirwais explained. “We can access applications for learning and calling relatives. The money we receive from the Greek government for our seven-member family is only 200 euros a month. It's not enough for us to buy a SIM card. I’m so happy that NetHope came to provide Wi-Fi. I hope with access to the internet, we [the refugees] can solve at least half of our problems. It’s a lot for us.”

Mirwais is grateful for all the Greek people who provided clothing and food for him and his family during this time. But he knows that they cannot stay due to economic troubles in the country. He hopes to move with his family where he can have the freedom to continue going to school and have job opportunities. In the meantime, he relies on information and connection to nurture his family and community. The road ahead for Mirwais is hard, but having access to information via Wi-Fi will enable him to continue growing and giving to others.

The NetHope-led Syrian Refugee Connectivity Alliance was made possible by the support of Cisco, Facebook, Google, Microsoft, The Patterson Foundation and UNHCR. With the completion of this mission, 75 refugee camps in Greece now have Wi-Fi, providing refugees with critical access to family and friends and services.