Project Reconnect: with Chromebooks, refugees work on their plans for the future

In 2016, Google Germany and NetHope started Project Reconnect, an initiative to provide refugees access to online education and information. Today we reflect and (re)connect with some of the organizations whose initiatives were supported with Chromebooks sponsored by Google.org. 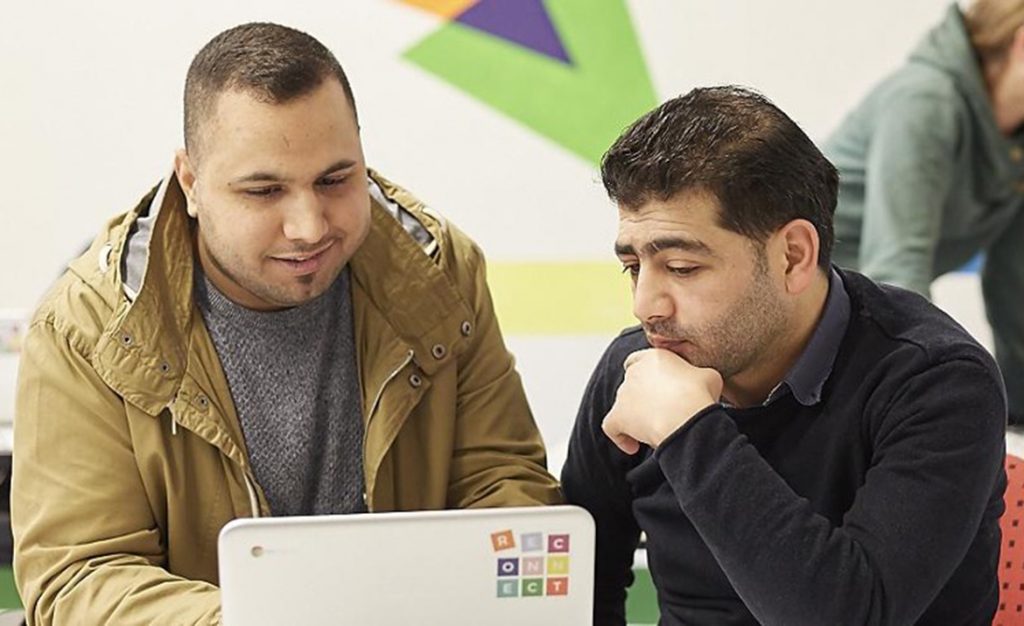 Note: Read the German translation of this article.

It was the Summer of 2015. Desperate refugees from Syria, Afghanistan and many other regions in crises were fleeing their homeland into Western Europe. In less than 6 months, Germany was host to about 1 million refugees who were desperate for food, water, shelter, health care AND hope for a better, safer future.

For us at NetHope it was clear that we had to do something to help. Since NetHope was founded in 2001, we have simplified collaboration between our member organizations, foundations and technology sponsors and with that we foster innovations and solutions in humanitarian aid and environmental protection. Today NetHope represents around 60 leading international non-profit organizations.

Project Reconnect is definitely one of the most impressive projects we implemented during the refugee crisis in Europe in 2015. Initiated and driven by the Google team in Munich, we kicked off this initiative in January 2016 in Berlin.

Same as for us, many of our colleagues at Google knew they wanted to use technology to help refugees integrate in their new communities in Germany. Project Reconnect was born.

The Google team in Munich presented the idea and project internally, and received tremendous positive feedback and within days a commitment from California: Google.org, Google’s philanthropic group, donates five Million US-Dollars to our organization, for which we bought 25,000 Chromebooks. The goal was to provide these devices to non-profit organizations that are actively supporting refugees. At the end of the program our team had supported more than 1,000 sites in Germany with Chromebooks.

Reflecting on the Google/NetHope collaboration more than 5 years later, I feel a great sense of pride. All parties involved in the project, Google, NetHope and the recipient organizations have put so much hard work into Project Reconnect to help people in need. The willingness of Google employees to volunteer their time to advance Project Reconnect and to take on responsibility is amazing. A special thanks also goes to our former Program Manager Sybille Fleischmann - the project wouldn’t have been as successful without her commitment. She took the lead in the conception, development and implementation of the program.

The non-profit research institute RTI International, which supported the program with monitoring and evaluation, highlighted in their final report the many different ways in which Project Reconnect impacted people’s lives. Through the stories in the report and on reconnect.nethope.org we all got a chance to meet a few of the refugees who were using a Chromebook to study, reconnect with family or to navigate the day to day life in their new host communities. We recently reconnected with Anand and Hamid to learn how they've been settling into life in Germany. And we also learned from Sunita how she was able to study German with a Chromebook during the Covid 19 pandemic.

Training to become a baker

Hamid went to school for only three years before he and his family had to flee Afghanistan. It was difficult for Hamid and his four siblings to follow school lessons in Germany. In Bavaria, Hamid met the nonprofit organization Asylplus and began learning math and German with the help of a Project Reconnect laptop and online content from Asylplus. Both subjects were prerequisites for his vocational training in Germany. In 2016, Hamid started his first internship in a café and created his first cream cakes. This summer, Hamid passed his final exams to become a pastry chef. Hamid's younger sister Rahina used a Project Reconnect Chromebook to study for school. With the support of her mentor from Asylplus, she was able to catch up in school and has now earned her middle school diploma.

From the public library to care for the elderly

When Adnan, who had studied economics in his home country of Pakistan, arrived in Germany, he did not speak a word of German. At the public library in Bad Tölz, Adnan received tutoring and was able to use a Chromebook from the Project Reconnect to learn the German language and find out about educational opportunities in Germany. Adnan participated in a one-year federal volunteer program at Josefistift, a home for the elderly. Over time, Adnan found it easier and easier to communicate in German with his colleagues and the residents of Josefistift, and he was able to pass an advanced language test. In 2017, Adnan started training to become a state-certified geriatric nurse. Three years later he successfully completed his training and continues to work as a geriatric nurse.

Learning German during the pandemic

Sunita comes from Afghanistan and is the proud mother of two small children. Taking care of her children is time-consuming, which means she can only participate in language courses to a limited extent. Additionally challenging was the lockdown during the pandemic, making it difficult for her to learn German. Fortunately, she was connected with Freundeskreis Asyl Karlsruhe, a recipient organization of Project Reconnect, which continued to offer courses for refugees during the pandemic. These included, for example, a unique coaching program for women. In weekly 1:1 sessions, participants are introduced to using a Chromebook. For the rest of the week, participants learn independently using the Chromebook and info materials provided by their coach. Linda Busse-Özdemir, one of several coaches at Freundeskreis Asyl Karlsruhe, has found that many participants had never used a computer before the course. Basic computer skills such as opening a document, finding a website and also the ability to learn independently with online learning platforms are very important for finding work in Germany and helping children in school, she said.

These examples are just three of many more of how the initiatives supported by Project Reconnect, have helped refugees gain a foothold in Germany. I am always very touched by these personal stories.

Thank you once again at this point for Google Germany's trust in us. Thank you to everyone who made this project possible - the Google Germany engineers who donated their time to help us, the innovative and dedicated program managers and project teams, site managers, trainers, and volunteers at nonprofits across Germany who help refugees every day. It was an honor to work with all of them.

I feel gratitude towards our partners and all the amazing grantees and helpers and pride for what we have achieved together.

Many of the 50 non-profits, who received laptop donations from Project Reconnect, used the laptops to launch their first technology supported initiative. These organizations were already stretched to the limits during the refugee crisis in 2015/2016, but they wholeheartedly took on this additional challenge. They built or expanded digital capacity within their teams, and integrated computer-supported learning in language learning or vocational training programs, in high-school education and outreach programs for traumatized young refugees.

I am very happy that the experiences and technical expertise gained during Project Reconnect continues to make a difference in the lives of people in need. In 2020, when due to the Covid-19 pandemic in-person training was no longer possible, several organizations that had received laptops through Project Reconnect, made good use of the Chromebooks and adapted their programs to the changing needs.

The non-profit Freundeskreis Asyl Karlsruhe transitioned to online classes in late 2020. In an initial in-person meeting the trainer introduces the participant to the Chromebook and then provides him or her with a loaner device, and often also with a hotspot or datastick for online access in their home. The refugees study and practice German and learn how to navigate everyday life in Germany. Trainer Lena Maiß says handing out the Chromebooks builds trust. The use of the laptops motivates and empowers in particular female refugees to explore, learn and meet new people. The new course format also enables women in rural areas to participate, for whom it is difficult to come to the city.

The Nikolaus-Lehner-Schule, a public trade school in Dachau, Bavaria, is still using Chromebooks in preparatory classes for students with little or no German language skills. This 2-year program is designed to prepare young refugees for a professional education in Germany. Teacher Isabelle Bichler writes that the little Medion Chromebooks, are still regularly in use to work and collaborate in the cloud. The students have computer classes in a computer lab, but the addition of the Chromebooks enabled the teachers to take a unique project-based approach to integrate the laptops in language classes. Students practice the use of online tools while learning about German culture and the trades. With this experience, students were able to continue their studies, and stay informed and connected when the school had to close due the rapidly rising number of Covid-19 cases in the region.

It was and remains to be an honor to work alongside these dedicated people and teams.